Life of the Poor in India 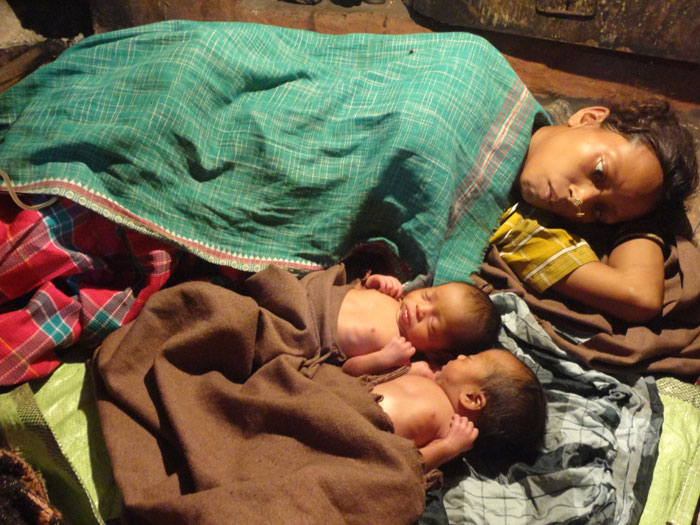 Whether in Alleppey or in Andhra Pradesh, the poor that the Franciscan Family Apostolate (FFA) serves are in destitute conditions.

Lack of adequate housing and sanitary facilities along with other issues put families at great risk for disease and disability. Prescription drugs and hospitalization is expensive so often people must choose between food for their children and medicine for themselves. Standing water and open drainage and sewer ditches breed disease bearing mosquitoes. Diseases such as malaria, felagia, degue and others are a constant with the poor. Depression, anxiety and other nervous conditions are not uncommon problems among these people as the sense of hopelessness and abandonment weigh heavily upon them.

The Poor in Alleppey Families live in villages scattered throughout the region. Narrow dirt paths lead into the neighborhoods where small parcels of land are divided by living fences of plants covered with plastic to afford some degree of privacy. Sometimes one has to pass through the yard of one house to reach another.

Many poor have no land. Since the land redistribution act in the Seventies, when land was taken from the wealthy and given to the poor, 12 percent of the population remain landless. Those having land received a minimum of three cents of land, or three one hundredth’s of an acre, the minimum amount needed to construct a shelter. Those with no land build temporary sheds on land classified as “wasteland” by the government. The area, because it abuts the Arabian Sea, is prolific with palm trees and sandy soil. During the annual monsoons, because the shelter is built with only palm frounds, the family is exposed to rain pouring into the shed. Even during good times the family sleeps on mats on the sand floors where children are awakened with bites from fire ants.

Huts are built from whatever materials are available: palm fronds, plastic sheeting, wood scraps, metal scraps, cardboard, whatever the family is able to find. The huts are often a single open room, sparsely furnished, with a fire in the corner for cooking. When the fire is lit, smoke fills the house.  Many of the poor, especially the children, suffer from asthma and other respiratory conditions from the intense smoke. Toilets, if they exist, may be a hole in the ground screened from view by plastic sheeting.

While Kerala, the state that Alleppey is located within, ranks among the most literate in the country, it is difficult for the children of the poor to do well in school – often they are sent off without an adequate breakfast. Poor nutrition and sanitary facilities make children susceptible to disease which means lost time from school. This limits their ability to compete for higher paying jobs and break out of the cycle of poverty they were raised in.

It is not surprising then that many of the poor earn a meagre living. Sources of income include domestic work, collecting and selling firewood, and odd jobs as a handy man or a day laborer. Some families are involved in coir work – working the fibrous layer on the outside of the coconut into mats and small rugs – but studies as recent as 2002 estimate wages in the coir inductry only equivalent to $2 a day. Fishing has always been a source of income in the region but since the 2004 tsunami catches have been poor. Men work on 6 to 12 man boats all night for a portion of profits from the catch but, often, barely receive enough to feed their family for a day. Unfortunately, the dangers of ocean fishing at night are great, and it is not uncommon for the breadwinner of a family to be incapacitated, sometimes for life, through an accident. It is then left to the wife to find extra work to provide for the family while caring for her ailing husband and their children.

Listen as Francis described the life of a fisherman and how the FFA has helped him and his family.

The Poor in Andhra Pradesh

Living contains are equally dire for the poor in Andhra Pradesh. The government has provided financing schemes for homes to replace huts in recent years but many of these houses in tribal villages now stand unfinished. There are problems with their construction: They are made of concrete with grass or tin roofs and built in a line attached to each other. They do not fair well during monsoon seasons. There are no toilets in the houses, open toilets are seen everywhere.

Most of the people are farmers. In the villages, entire families go to work together in the fields. The children work alongside the parents, caring for the younger children or the family’s animals, if they have any. While there is a push for the children to attend school, it is difficult to persuade the poor to let them go as they provide vital functions in the family. Diets are poor. Our staff finds that often the poor eat only rice. They cannot afford vegetables, fish or meat.  As a result, most of the children are anemic. Many of the villagers obtain their meals from poorly maintained road side shops as the women of the home work from morning to evening outside the house and cannot prepare meals. Those who do cook often do so outdoor in unsanitary conditions. All of this only contributes to ill health.

Since much of the area is prone to malaria, the disease runs rampant among the poor. With limited medical services available, it is often not caught in the early stages and goes on to effect the heart, kidneys, liver and lung. Mortality rates are high.

The situation of the poor in Andhra Pradesh is compounded as there are many families that have been affected by HIV/AIDS. Often these families consist of widows with young children — the father has died of complications from HIV/AIDS and the family has been ostracized by their tribe. They are to live alone and forbidden to attend any public functions. Even their extended families will forbid their presence at family affairs.

If you would like to help support these destitute people, you can learn more here.

Meet Those We Serve