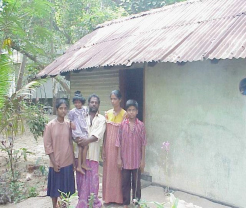 When you sponsor a family, you give them the opportunity to improve their lives.  The staff in our India offices will monitor your family and keep a record of their progress to share with you. You also receive quarterly letters from your family. Your help makes a difference!

As an example, the family of Joseph Gasper Kudiamssery began receiving assistance in 2002. At the time, the family was living in a semi-permanent hut with a damaged roof and the parents were unable to provide sufficiently for their three children and along with one daughter had many medical issues. Over the years, with the aid of their sponsor, the children completed their educations, the family undertook the building of a home with government subsidy, and  medical problems were treated. The family is now able to continue on its own without help from their sponsor.

To learn how you can sponsor a family and make a difference in their lives, click here.

Here are excerpts on Joseph’s family from reports filed by the FFA staff:

2002 Original Report:
This is one of the poorest and most deserving families in their area. The applicant Joseph and Rosamma are poor couple having three children, two daughters and a son. The applicant Joseph is a fisherman. But as fishing is seasonal he has no regular earnings from his work. He is a hired worker in other person’s fishing craft and he hardly gets anything for his hard toil. Most of the days he returns from his work with empty hands. His wife Rosamma does coir works at home. But the little she earns is insufficient even for a day’s meal for the family. Their three children are of school going age. It is heart breakable to see the innocent faces of these starving children. The poor parents could only witness the suffering of their loving children. The noon feed from school is the only meal for these children for most of the days. They are staying in a semi-permanent hut, which is built in the corner of their paternal share. The roof of the hut needs urgent repairs, which is beyond the reach of this poverty-stricken family. Their life inside it during the monsoon is very miserable. If this situation prevails the poor children will be forced to discontinue their studies.

2014 Update:
The family started getting assistance from 2002 onwards. Their sponsor is one among our generous sponsors and although the family missed to get help in some quarters their sponsor recouped them in the following quarters. The family well utilized their sponsor’s timely aid and improved much. Joseph goes for fishing and is taking medicines for prolapsed disc complaints. His wife Rosamma goes for odd jobs. She was suffering from uterus problems and thyroid complaints and her ailments were cured due to regular medication, which was enabled with this help. They provided good education for their children too. Their elder daughter completed general nursing and was working. She was settled in marriage in 2012 and is having a baby now. Joseph’s son completed hotel management course and is working abroad since two years. The family has debts in connection with his studies and visa for his work, which is being refunded. The younger daughter is studying in 12th grade. She has some nerve complaints and is losing sight of her right eye. She needs surgery for squint too. They were staying in a semi-permanent hut for long years and constructed a house with government grant and have a debt of $ 2950.00 in connection with house construction and daughter’s marriage. The great botheration of this family is the sickness of their younger daughter and the family needs support to clear their debts and for their medical needs.

2015 Update:
Joseph is going for fishing and he suffers from prolapsed disc problems for which he needs medication. Rosamma goes for odd jobs whenever she feels healthy. Their elder daughter Mary Jinla is settled in marriage. Her husband is working abroad and she is working as nurse in Cochin. They are blessed with a baby boy. Joseph’s only son Bruno David is working as electrician in Oman and is on leave now. He could pay off almost more than half of the debt incurred for his studies and for his visa. The younger daughter Fami Jerina is learning Software Course second year. She underwent surgery for squint eye and is being taken for random check ups. They are extending another room and building a kitchen adjacent to their house and the work is progressing. This family seems self-reliant as they can live of their own and could pay off their debts with their effort.

2016 Final Update:
This family is being sponsored since 2002. When you took up this family they were in utter despair with no house and no means to survive. Later on with your regular help, they could survive and along with the help of educational loans, they could educate their three children very well. In 2010 they received a government grant and built a concrete house and you provided them with bulk amount to complete the house construction too. Recently they extended a room and kitchen, which they could complete of their own. Joseph is going for fishing. Rosamma goes for odd jobs whenever available. Their elder daughter Mary Jinla is settled in marriage and her husband is working abroad. They have a daughter named Anvia (baby in the photo) who is attending the local kindergarten. Joseph’s only son Bruno is working as chef in abroad and earning well. The younger daughter Jerina is doing final year graduation in computer software. She underwent surgery and her vision problems has cure. The family is ever grateful to you and requesting your good self to substitute another family who are in dire need of some help.

To learn how you can sponsor a family and make a difference in their lives, click here.

Category: The FFA in Action