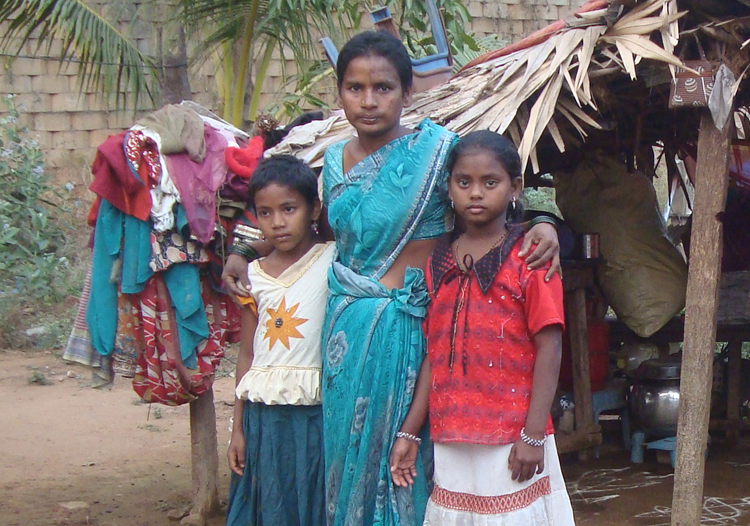 Update: Lakshmi and her children have been sponsored. Thank you! You can read about many other families in need of sponsors here.

The Reddy family is one of our saddest cases. The director of our Andhra program, Sister Carmel, started her description of this family to us with the sentence, “Lakshmi is one of the deserving heroic women of the time.” Read some of her story and decide for yourself:

Lakshmi married her husband, Srinu, as a teenager. They quickly had a daughter, Siva Lakshmi, and two years later another daughter, Kumari. Despite the happiness her daughters brought her, their home life was very difficult. Lakshmi married young because of her own family’s poverty and quickly learned that her husband was not the man she believed him to be. She discovered that he was addicted to the use of illegal drugs, and that she was actually his third wife. The situation in her home was so bad that when she gave birth to her third daughter she chose to give the child to another couple that could give the child a better life. Despite her attempts to continue a life with her husband, when she became pregnant again and gave birth to a fourth daughter she was forced to make the same heart-breaking decision and give the child up for adoption.
Lakshmi’s husband does not provide for the family, and is now essentially a stranger to them. This leaves Lakshmi has the sole provider for her two girls, who are now 10- and 8-years-old. The family has essentially no home. They lived in a hut on a piece of waste land until it collapsed ina monsoon. Then, shelterless, they began living underneath a temporary thatched shelter held up by poles. They have no property, no permanent residence, no help from family, and only the unreliable income that Lakshmi makes working odd jobs. They are truly one of our saddest cases. And despite this, Lakshmi remains optimistic about their future. She works as hard as her under-nourished body will allow, and she has managed to raise two smart and attentive children who are still in school.

A sponsor for this family will surely make an enormous difference for them in every way. Our staff is eager to help them acquire a stable source of income and reliable housing so that Lakshmi and her daughter can finally have a life with security, dignity, and self-reliance.