We Walk the Road Less Traveled 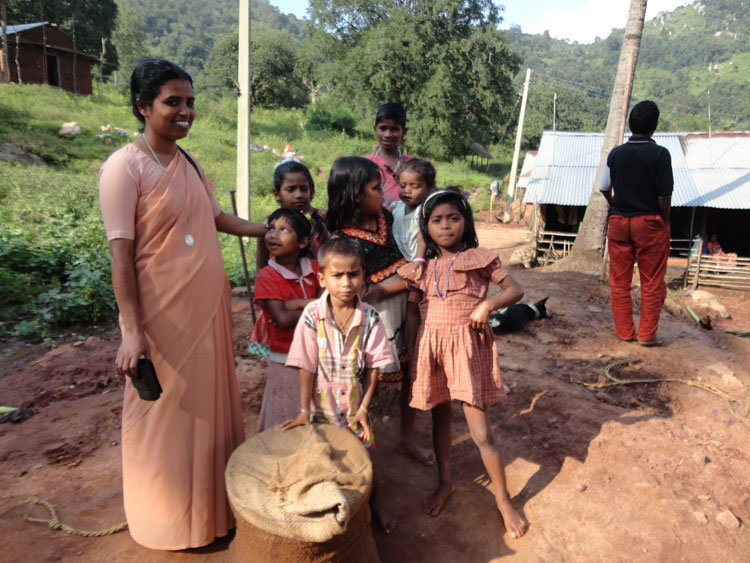 We the Canossian sisters run a small dispensary, partially supported by the Franciscan Family Apostolate, in Jubo among the Tribals. Village families early in the morning go to the mountains for the cultivation and to gather food for their daily survival. All the family members including the small children to the elders are busy during the day on the mountains. They collect food and cook under the trees. They are people who are simple and known as the children of the forest.

Last week two families were cooking under a tree and as the smoke went up it hit the hive bee. At once all the honey bees came out of the hive and started attacking the people. Mercilessly the small children, their parents and grandparents were all attacked by them. They were so helpless and they somehow came back to their own houses. When they reached back home they were down with high fever and were finding difficulty to breathe. Neighbourhood families shared the message with the sisters. The victims were not able to come to our dispensary so we visited them at once. We were shocked to see them lying with high fever and not even able to breathe. All their lives were in danger. We provided them with required medications and followed them tenderly. In a week’s time they restored their health.

During these past two months (April and May) most of the people were affected by Malaria. We were able to reach out to many and could save their lives. People in a far away village named Dumdrum were badly attacked by Malaria and one of the villagers came to inform the sisters that the villagers are suffering immensely and are unable to come to the dispensary due to the distance and no proper conveyance is available other than walking. Sisters carried the medicines and walked to the village. Timely medical assistance provided by Franciscan Family Apostolate for the sisters turned out to be life giving experience to Jubo and its surrounding villagers especially the lives of Dumdrum villagers. Daily about 30-40 poor patients are served by the sisters. We are happy that our presence here makes a real difference by serving the poor and the needy in our locality. History speaks the truth loudly that before we could start our mission in Jubo many children, youth and the old were dying due to malaria and other contagious diseases especially during the months of April, May and June. Presence of sisters in these remotest villages has made the death rate come down. We are not able to reach out to other interior villages due to lack of transportation facilities but we are relentlessly trying to solve this problem too.

The Canossian Sisters of Jubo

← The Heat Is On In India
Self Development Seminars →